I have a Craftsman 9hp dual (eg electric) start snowblower. It is very similar (or the same) as the one in this manual. It has been running smoothly all winter - I can start it reliably with the choke, a couple pushes of the primer, and one rip on the pull-cord.

Yesterday in the middle of cleaning the drive it stalled. I assumed that it was out of gas, but in retrospect there was no coughing - it just stopped without warning. Now I can't start it. I've added gas, and tried the electric start (which worked previously). The electric start does give a little 'click', but it never turns over.

The troubleshooting section of the manual isn't worthwhile. Any idea what the issue could be?

Since I posted this, I have tried (and failed) a couple times to re-start the snowblower. This weekend before going to borrow a neighbor's spark plug socket (and general mechanical knowledge), I tried it again and it started on the first pull. After an hour of work it died just as suddenly, and in the same spot.

Here's my theory. This day (just like the first time) was very light snow that blew around in clouds (see image). By the time the snowblower died, a lot of snow had landed on it and melted - there were puddles on the top of the engine. The snowblower died going about half-way up our medium-incline driveway (also see image).

I suspect that perhaps this melted water ran back onto something bad when I started going up the hill. Is that possible? 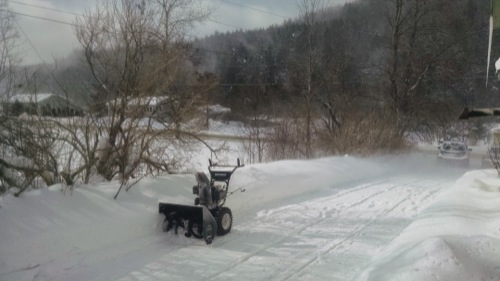 I probably have the same engine, is it the 9HP Tecumseh Snow King? There are several possibilities. Here is what you can do to debug the problem when it happens.

Check the plastic key! Mine fell out while operating. Hard to check on what is not there. Found it, and back in business. JO

Not the answer you're looking for? Browse other questions tagged engine small-engine or ask your own question.