Is a temporary covering required/recommended around a broken headlight?

My 2009 chevy Silverado must have gotten hit in a parking lot (Florida), the drivers side headlamp is shattered. 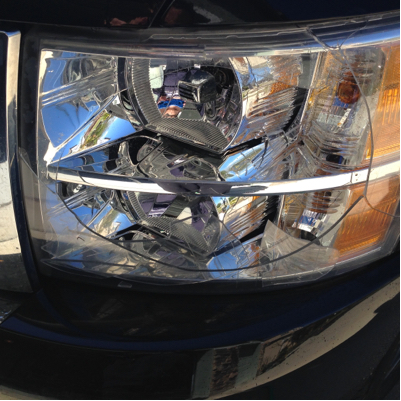 A replacement is on order.

I've seen people cover broken brake and tail lights with red translucent tape. I was wondering if it's recommended or required to cover the lamp with some sort of material. If so what material is recommended? Or should I just wait and put my new head lamp in?

I wouldn't bother covering it. First reason is the lamp gets hot enough to ignite or melt any type of clear tape that you'd use. Second is that there is no need to protect the lamp assembly from damage, the replacement is a complete unit. It contains the lens, reflector and the housing. I would remove the lamp and socket. Cover the socket in a plastic bag so it won't get wet. The reason for removing the lamp is without the lens it may shine in the eyes of oncoming drivers.

I wouldn't even remove it until the replacement arrives. The only thing which is broke is the Lexan cover. There would be no more of a reflection (or chance of it flashing someone in the eyes) than would be seen normally. Another reason is that any road debris which comes up has the chance of damaging something which would normally be protected by the headlight assembly. Lexan is pretty tough ... looks like it doesn't compete with some irresponsible drivers though.

The bulbs will probably burn out soon enough (during first rain storm) or as soon as some contaminants get up on the bulbs. I'd automatically plan on replace all of the bulbs (both sides of the vehicle, top/bottom). When headlight bulbs are used for a period of time, they become dimmer. You'd probably notice a difference between left/right when looking at it. (Not that it would be a big deal, I just personally like mine to be of equal brightness.) Remember when placing new bulbs, do not touch the bulbs with your bare hands. The oils from your fingers get on them and will cause premature death of your bulb (like in days/weeks instead of a couple of years).

I've seen people cover their broken headlight with tape, and it makes me cringe. The tape can melt and end up being useless after just a few hours. It's best to go to a car repair shop to get it fixed, or in your situation, wait for the replacement.

I am not a lawyer but Fl statutes require at least one headlamp per side.

(1) Every motor vehicle shall be equipped with at least two headlamps with at least one on each side of the front of the motor vehicle, which headlamps shall comply with the requirements and limitations set forth in this chapter, and shall show a white light. An object, material, or covering that alters the headlamp’s light color may not be placed, displayed, installed, affixed, or applied over a headlamp.

Personally, i would apply clear tape and hope for the best

Not the answer you're looking for? Browse other questions tagged headlight or ask your own question.