Took it into the garage and they've identified that the "cam cover" has at one time been removed and simply glued back into place, as a result it isn't attached properly and is causing a lot of air to be sucked in.

They're quoting over £300 for the repair and labour.

I've searched the web for "cam covers" (that's what I think the garage called it) and I can't really find anything that matches exactly. Is it possible it's called something else?

Also, easy one to do myself?

Found this from Mobil Oil:

On the very top of the cylinder head is a sort of oblong dome secured to the cylinder head by a significant number of small bolts or screws. If your engine is an inline-4 or inline-6, there will be one dome. If the engine is a vee-configuration, such as a V-6 or V-8, there will be two of these domes, or one capping each cylinder bank. This component can be made of stamped steel, cast aluminum, or plastic, and it goes by many names: cam cover, rocker cover, rocker-arm cover, rocker box, and valve cover. These names are often used interchangeably, but each name actually refers to a specific engine type.

Example: “Cam covers” are found on overhead-cam engines, because the cover is actually covering the cam shaft and its cam lobes. “Rocker arm cover” refers to an overhead valve pushrod engine such as the new Chrysler Hemi or the venerable Chevrolet small-block V-8. In these engines, the camshaft is deep in the block but the rocker arms, set in motion by the pushrods, sit on top of the cylinder head and lift the valves. From now on, we’ll refer to these domes as cam/rocker covers.

From what I can see elsewhere it's less than £100 to buy a new one, and the job doesn't appear to be too tricky to replace it.

Some more background in response to comments:

I asked the garage if they meant the cam cover or the cylinder head cover and they said it was the same thing. They said the cam cover appears to have been removed at one point in the past and glued back down. That was news to me. All I can think of is it may be related to some auxiliary belt problem a while ago. A number of garages took a look at it and all said the engine was at fault, but I couldn't believe this as it had only done 40K miles at this point. It's possible one of those garages removed the cover and didn't put it back on properly.

I've uploaded an image of the part I think is at play. If I understand what they are saying it basically means this is just open at the seal and is letting air directly in. 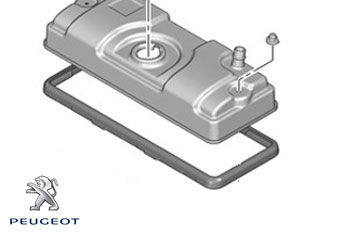 All very strange to me.

It's not just the cover that would need to be replaced. Normally they also have gaskets or rubber seals around them to stop any dirt getting into the engine itself or escaping from the engine.

It may be you are being quoted for a cam cover, seal kit, oil and oil filter + labour.

What you need to ask for is a breakdown of what the costs are from the mechanics so you can compare the costs effectively.

Replacing a cam cover gasket is a straight forward job to do. Its simply removing the securing set screws, removing the cover(s), cleaning any residue debris from covers and cylinder header, fitting the gasket to the cover(s), and replacing the cover/gasket/screws, tighten evenly and finally check for leaks. If you do not have a compatable scanner for your vehicle the vehicle will need to be driven for a drive cycle to re-set the engine ECU CEL. £300 pounds seems quite a lot of money for this gasket change, but you have to consider the cost for diagnosis and an ECU re-set, plus 20% tax in the UK. It all becomes a bit more reasonable, especially if there is some other item requiring attention. After all the cover(s) had been removed previously - Why? Is the camshaft front seal servicable?