Vibrating sound and shaking when turning the wheel after changing timing belt?

On Monday I went to the mechanic to replace a ripped timing belt (red arrow in the picture). He also replaced some wheelie that was damaged. He told me that green circled box in the picture was the timing belt, and not the ripped belt (red arrow). Now, after I picked the car there is a vibrating and shaking feeling from the wheels/steering wheel when I turn left or right. What is the belt in the red arrows? what is inside that box? And any idea what he could have messed up? 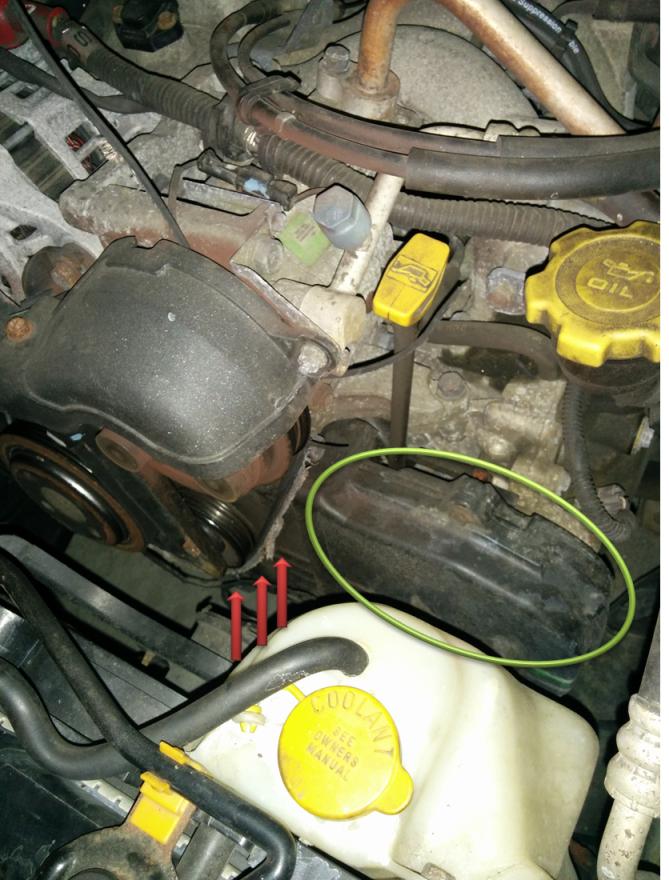 Your mechanic did not steer you wrong (pun intended). The area with the red arrows is actually your drive or serpentine belt, not your timing belt. What he replaced (besides the belt) was either an idler or tensioner pulley, which probably caused the belt's demise in the first place. The timing belt should be located under the cover which you have circled in green.

While I cannot tell you exactly why you are getting a vibration while turning, but am wondering if the power steering pump might have been damaged as well when the belt let go. While there is an outside chance of this, it is at least plausible. The other two possibilities I can think of are related. One being a belt which is too long was installed or the pulley which was replaced is not providing the correct tension on the belt. This would most likely cause squealing from the drive pulleys though.

I would take it back to the mechanic and show him what's going on. He should be able to better tell you what is going on.

Not the answer you're looking for? Browse other questions tagged wheels timing-belt vibration steering-wheel shaking or ask your own question.

11
What are the possible causes of vibrating steering wheel?
3
Does the Timing Chain Need to be Replaced on the 2008 Toyota Sequoia at 90,000 Miles?
6
What could be causing my car to shake at high speeds?
4
95 Honda civic timing marks
4
Shaking steering wheel after new tires
1
Dodge Stratus 2000 shaking at idle after timing belt replacement
2
Vibration at certain RPM after timing belt replacement
7
Volvo 2.0D engine "self-oscillates" after changing timing belt and adjusting fuel-injectors
1
Honda Civic, severe bouncing and shaking on highway when accelerating plus noise