When I release the clutch at 3:rd or 4:th gear on my -98 BMW 328i, it makes a little low pitched squeal, for maybe half a second. This is not an issue on the other gears however.

What could be at fault? 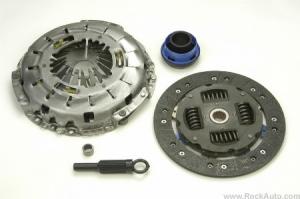 The downside is that replacing it means digging into the transmission, which means replacing the clutch, too. I have worked on my E46 enough to know that this would be... um... less than fun, and would require special tools that you very well may not have. I'm reluctant to guess what a shop might charge.

Maybe it's worth waiting until the clutch needs replacing before doing anything else.

I hope that helps.

Not the answer you're looking for? Browse other questions tagged bmw clutch or ask your own question.

5
Clutch pedal on 1995 VW Golf is sticking
4
weird noise when I use the clutch
6
Car I test drove had a high clutch engagement point; why?
2
Clutch or damaged 5th gear?
5
Car rattles at low RPM
3
Is my clutch worn out?
4
Rattle at some point of clutch engagment when the pedal is coming up
1
Clutch pedal became “springy” after installing new clutch
1
Clutch slipping for half of a second sometimes