WHY does an engine stall? (manual transmission)

Before you write off my question as one that's been answered a million times already, I want to clarify. I understand that the engine needs to go a certain rpm and when you try to engage the clutch at once from a full stop, the engine does not have enough power to move the vehicle at that rpm and then the engine stalls. My question is, WHY does the engine need to run at a minimum rpm? To clarify, there a two specific scenarios I want to discuss:

1.) Say you are going from full stop into 1st. You engage the clutch too quickly; the engine tries to move the vehicle, forcing the rpms to drop down too low which causes the car to stall. Why can't engines be designed so low rpms doesn't equal a stalled engine? Is this because the engine will overheat and this serves as a protection measure?

2.) Say you are going at 70mph and then you slow down to 20mph while still in 5th gear. In this situation (I've never done this but I'm only guessing), the engine will likely stall because the engine wants to go a certain rpm, but in 5th gear the engine needs to go slower than its minimum rpm and the engine does not have enough power to accelerate the car. Is this correct?

Thanks for your help guys! I'm just learning how to drive stick, and I want to understand how everything works under the hood too :)

What it comes down to is there are trade offs. In the case of the engine, it's torque output and rotating mass versus engine speed ... read on.

First, it isn't power which is needed, but torque to keep an engine running. In the early days of engines, each had one cylinder and didn't run very fast. To keep it running, it had a very large flywheel attached to it. Once the engine was running, it continued running because there is a little physics statement which says something like, "mass in motion tends to stay in motion" and conversely, "mass at rest tends to stay at rest". The flywheel provides the mass which I'm talking about. 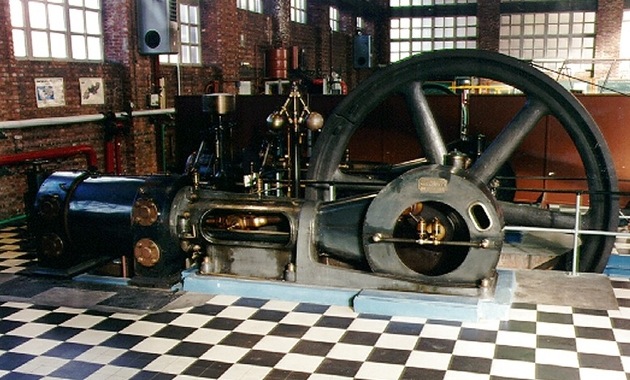 (NOTE: This is a single cylinder steam engine, but the same principle applies.) 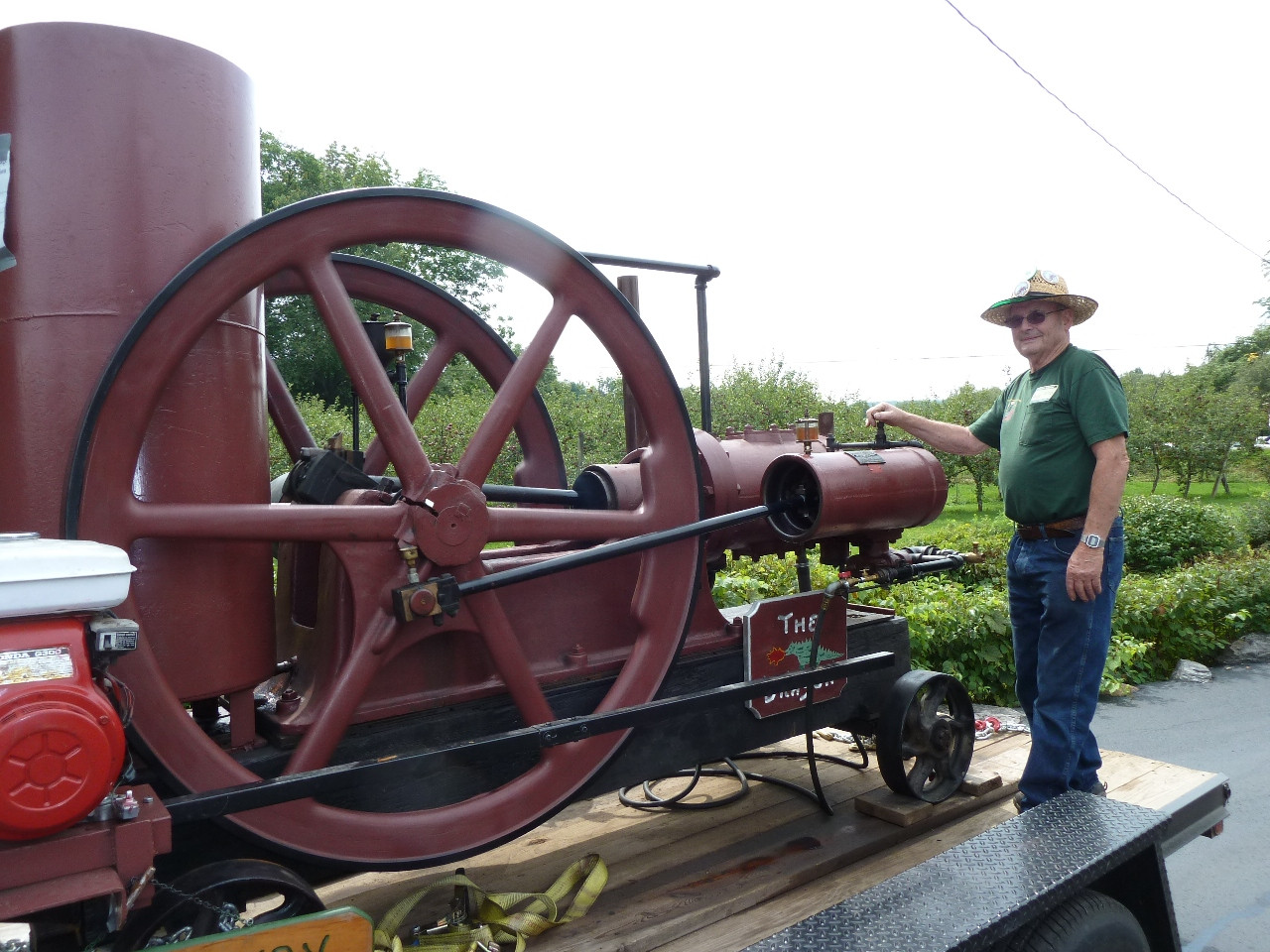 (This single cylinder gas engine has two flywheel masses, one on each side.)

Today's engines are no different than those of old. They still require the mass to keep on running. Without some sort of flywheel, they will stop running. A manual transmission has a regular flywheel, which is its engine's mass. An automatic transmission has a torque converter, which is the mass for its engine. Without it, the engine will die because there isn't enough mass to keep it going between piston firings. The flywheel mass provides the torque needed to keep it going.

Even with this in mind, in order to keep an engine going at lower speeds requires the engine to produce more torque. Think of a large ocean going vessel with a diesel engine. The Wartsila-Sulzer RTA96-C is supposedly the largest diesel engine in the world. It runs, full out, at 127 rpm (that's typically 1/7th the speed of your average car engine). How does it stay running at this speed? Two reasons: mass and torque. The total mass of the engine is huge ... they don't advertise it directly what the rotating mass (crank shaft, flywheels, etc) of the engine is, but if you look at the video, you'll see what I'm talking about. The second part is the torque. They advertise that the KW output for their 14-cylinder engine @ 127rpm is 80,080 KW. If you run that through a few calculations, 80,080 KW converts to 107,389.03 horsepower, which at the given RPM is 4,441,001.46 ft lbs of torque. Your standard 4-cylinder car only puts out in the neighborhood of 150-180 ft lbs of max torque, and that's at a much higher RPM, say between 2500-6000. (NOTE: Some 4-cylinder engines can put out way in excess of this, say like around 300 ft lbs or even more. I'm just using the numbers as a general guideline.) It takes a minimal amount of torque to keep the engine running. I don't even think Jay Leno would contemplate sticking a Wartsila engine in a car (though I bet that doesn't stop him from thinking about the engine, lol).

The flywheel mass can only do so much. Once the crankshaft reaches a low rpm threshold, the engine will stop running. When an engine gets below this threshold and tries to continue to run, a large amount of stress is put upon the internal components of the engine. Think of the immovable object (pistons and rods) meeting the irresistible force (the air/fuel mixture blowing up). Once the engine slows down enough, its mass (as well as the mass of the car) reaches the point where it wants to rest (the other end of the mass-in-motion deal). Something has to give and that give usually comes at the cost of piston/rod. When you slow a vehicle down from speed while keeping the transmission in 5th gear, you will do what is called lugging the engine. You'll start feeling the engine jerking heavily until it quits running. This jerking feeling is what I was talking about when I said your engine will start experiencing extreme stress. If done long enough, the engine can experience enough stress to cause catastrophic failure. Even done for short period of time damage can occur.

So, bottom line is, an engine requires so much torque output to keep it running. As the engine slows down, that torque requirement goes up to keep it going. At some point, a small engine just does not have the needed mass, nor can it produce the torque which is required to keep it running.

The engine is optimized to be efficient at high rpm or at low rpm (racing engine or cement mixer design respectively) but it can't be efficient at every possible speed so it is up to the driver to choose the best gear and speed to match the capabilities of the motor he has, i.e. keep it revving at an appropriate rpm for the speed/torque demanded of that motor type.

There are a couple of issues with trying to run an internal combustion engine slowly.

In a four-stroke internal combustion engine the cylinder goes through four strokes.

Only on the "Bang" stroke does the cylinder produce torque. During the other strokes, especially the squeeze stroke and the transitions between strokes the cylinder consumes torque. If we have four or less cylinders we therefore need to rely on inertia to keep the engine turning. Below a certain speed this won't work and the engine will stop.

If we have more than four cylinders we avoid that problem. There is always at least one cylinder in the "Bang" stroke but we have another problem.

For the engine to provide force overall the cylinders in the "bang" stroke must provide more force than the cylinders in the squeeze stroke consume. Much of this force is generated by thermal expansion of the gasses but thermal expansion is a temporary process. As the gasses in the "bang" cylinders cool they will no longer be able to provide enough force to overcome the force from the "squeeze" cylinders and the friction in the engine.

Steam engines are a different matter. Combustion and steam generation are continuous processes indepdent of rotation speed. So provided the engine has sufficient cylinders it can produce torque at zero speed in any position.

Not the answer you're looking for? Browse other questions tagged engine stall manual-transmission or ask your own question.

8
Why do engines run badly below the normal idle speed?
11
Does stalling damage my car?
4
What is the theory behind rpm and torque?
1
Lighten flywheel to increase top speed?

16
Engine revs high 5th gear manual transmission
22
Why doesn't the engine stall out when you come to a stop with an automatic transmission?
5
Does the a gasoline or diesel engine supply fuel at high speeds when not pressing the pedal and more
2
my car acts like its going to stall at a stop
5
Why does my 2016 Mustang GT Manual jolt/thud when I shift?
9
Is it common to fail engaging first gear or a manual transmission car occasionally?
11
Optimal RPM range for manual transmission
5
Will a manual vehicle stall at low RPM without being on the accelerator?
1
Why do some motorbikes need consistent throttle/acceleration/raise to keep the engine alive even if i have pressed full clutch?