How to troubleshoot headlights intermittently on and off with headlights switched off?

The headlights (and parking/tail lights) intermittently come on (and off), even after the headlights are switched off.

Typically, after parking, I'll turn off the headlights and remove the ignition key.

Sometimes the headlights will turn off as expected, but sometimes they stay on. If they are off, usually, within minutes, they will turn on, by themselves.

The headlight system is a "standard" system, meaning there is no feature to "automatically" turn the headlights on/off based on the ambient light level.

As far as I know, when the headlight switch is turned on, the headlights remain on, at least that is what I have observed, but there may have been times where the flashing occurred with the headlights switched on, but I didn't notice.

This has happened since I purchased the car used. It seems it was rare at first, but it happens all the time now.

Some other oddities that I'm not sure of... It seems that sometimes, the parking/tail lights will come on but the headlights will be off, or the left tail light will be on, but the right tail light will be off. I can't be sure of this because it could have just been a matter of looking at one place or another while the lights were turning on/off, and thinking some lights were on and others were off. If this sort of thing is actually happening, it is rare because I have not been able to confirm it.

How do I troubleshoot this?

I think to pull a fuse is easy, as disconnect the battery. Anyway, I think some relay is broken. That will explain, why it flashing randomly. Turn the lights on and pull the relays under the dashboard one after another, until the light are off. Replace this relay ( shop or maybe you see the same one at another place).Hope, that will fix your issue.

Basically your headlamps are controlled by a computer. The Front Electronic Module (FEM) to be exact. The FEM grounds the headlamps when it wants to turn them on. This system was an early Multiplex design that reduced wire and total circuits where the modules communicate on a single serial line, now referred to as the CAN Bus (Controller Area Network). You will likely need a scan tool to diagnosis the car, and not a cheap one, but a professional model. You many even need a factory scan tool, though I doubt if for a Ford. Outside of security theft deterrent systems they allow the aftermarket professional scan tools to access their systems.

So where do you go from here? With or without a scan tool, the grounds are a good place to start.

G303 are the main ground for the FEM.

You can see the FEM, G304, and C179 in the picture below. Outside of checking the connections and wiring there is not much you can do without a scan tool. 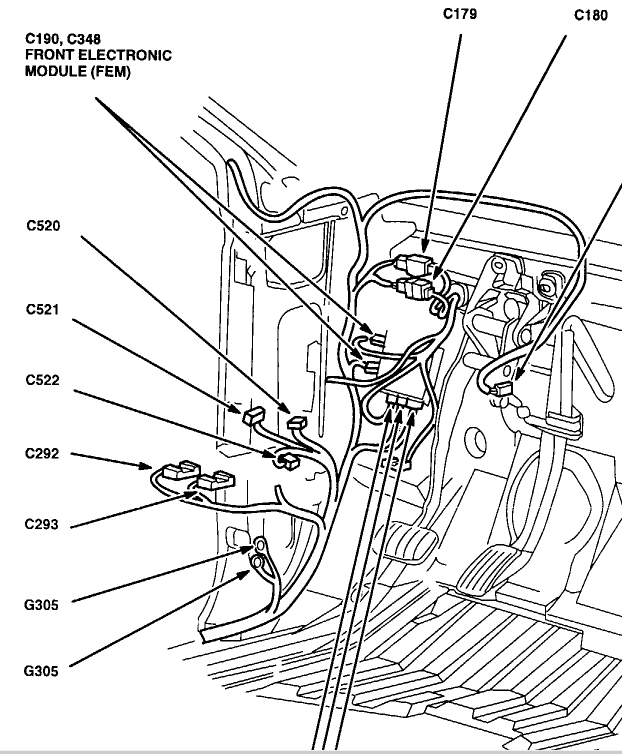 Not the answer you're looking for? Browse other questions tagged ford headlight windstar or ask your own question.