Why are V engines less smooth?

I'm learning how to ride a motorcycle on a Suzuki Gladius SFV650, with a V-twin engine. But I also had the chance to ride a Kawasaki ER-5, which has a parallel twin engine (550cc).

I've noticed that the Gladius is more impulsive than the ER-5, as if its engine provided more jerky torque. I asked my instructor if it's because Gladius's engine is larger (in terms of cc), but he said that although engine volume plays a role, the main reason is that the Gladius has a V-engine.

My question is: Are V engines generally less smooth than in-line or flat engines? And if so - why?

I've read the Wikipedia article on V engines, but I didn't find an answer there.

Also, the Gladius uses fuel injection, whereas the ER-5 has a carburetor. May that contribute to Gladius's "jerkiness"?

He is mostly right and here's why ... 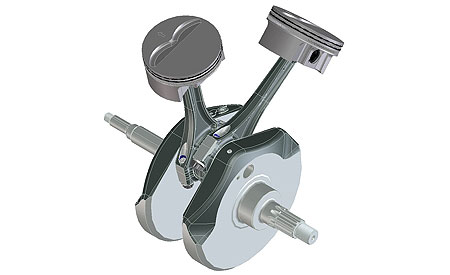 The deal with this design is when combined with the 45 degree offset of the cylinders, it results in a minimum power pulse interval of 315 degrees. A cylinder fires, the crankshaft rotates 315 degrees while not under power, then the next cylinder fires, the crankshaft rotates another 405 degrees, then the first cylinder fires again, the crank has to rotate 315 degrees, etc. This leads to uneven power production and limits the amount of power it can produce. Energy is lost between the second cylinder firing and the first firing again. This is why you get the pop-pop-pause, pop-pop-pause characteristic Harley noise. Since the power pulses are non-symmetrical, power/torque is produced at different times as the crank goes around. This causes power to feel off balanced during acceleration. It will seem to grab more at some places and seem to be slacker at other. This will be a lot more noticeable at lower engine speeds as when the engine speeds up, there is less time between the power pulses and is therefor less noticeable.

You'll notice I said at the beginning that your instructor is "mostly right" ... that's because there are other engine setups where V-twins may NOT be on same pin (or crank journal) and therefor can fire symmetrically and produce power at every 360 degrees of crankshaft rotation. Inline 2-cylinder engines can be setup like this very easily as well as inline and 90 degree V-4 engines. The inline engines can be built using a lot less mass on the crank shaft, which allows them to rotate more easily at a higher rate of speed (higher RPM) as well produce cleaner power, but they take up more space in the bike for the displacement they give. Since these types of engines fire symmetrically, you won't feel the power surge because the engine fires more consistently on each revolution of the crankshaft.

29
Static vs. Effective compression: Why does higher effective compression not require higher octane gas?
7
Should I run my generator dry in preparation for storage?
5
Car stalls when braking (VW Mk1 Golf)
18
WHY does an engine stall? (manual transmission)
35
Changing Firing Order in a 4 Cylinder Car
6
Why are most engines made with even numbers of cylinders?
20
Why do Harley Davidson engines suffer from such poor performance?
4
Repairs cost more than engine, but car might have some life left
0
Why does my motorcycle cut out at random intervals?