What can I do with used motor oil?

I've heard, for example, that I can use it to lubricate the drive chain (in a motorcycle / bicycle), but that doesn't appeal to me.

Don't use it for anything, it's an environmental hazard.

Just get rid of it in the least impactful way.

Used motor oil has a plethora of bad chemicals and compounds in it that eliminate for another use once it has been inside your engine for an extended period of time.

Here's a link from the CDC.

Most auto parts stores in Western Europe and N. America will allow you to pour into their waste containers for free and a service company will pick it up for recycling and reuse for other purposes like door hinge lubricant.

The most socially conscious and morally responsible action is to recycle. There is also Nietzsche's argument that we all have a moral obligation based upon our innate contract with society when we are born to what is best for our society.

Most philosophical disciplines would drive to a moral standard that states you are obligated to recycle until there is a better less impactful solution that comes about through the evolution of technology.

This also provides a great example for those that surround you. Young or old, our behaviors are inherited from others and recycling is a great behavior to pass on to others.

If you were to have a significant amount of used oil, you can sell it back to the re-cyclers. Some garages use used oil in burners to heat their workshops, some garages will dispose of the old oil for you. At the end of of the day though, used oil is just used oil and should be disposed of responsibly.

While this may not answer the exact question, I would not use old motor oil to lubricate bicycle or motorcycle drive chains. It has excellent lubricating properties (and the fact it's used does not matter for this low-tech application), but it doesn't stay on for maximum possible time.

The black color of motor oil should not be an impediment for using it in drive chains. The drive chain lubricant, even if clear when applied, will anyway shortly turn black.

On an emergency, e.g. when riding a bicycle or a motorcycle on a road trip in the rain, motor oil can be used as an emergency lubricant. The best way is to try to find a discarded motor oil bottle from a gas station that invariably has very little motor oil left, or to find a garage that has used motor oil. However, when lubricating a bicycle or a motorcycle at home, I would not use motor oil because the thixotropic lubricants are better.

So, I would simply take the motor oil to a place that accepts used motor oil. They probably have a far better use for it than you have.

I use it, blended with diesel and kerosene, for undercoating. I'm rural, though - you probably couldn't do that in a city. You can also superfilter it (toilet-paper filter), then heat it above 100*C (to boil off any contained water), and reuse it as motor oil in less-than-critical engines (lawn mowers, etc) or as two-stroke oil for chainsaws. After superfiltering, it makes a fine general-purpose oil.

No amount of brake cleaner or engine degreaser was effective in cleaning up my valve cover (pictured below). Moistening the dirt with some used oil pulled the grime right off and made it a lot easier for brake cleaner to "wash" it off. 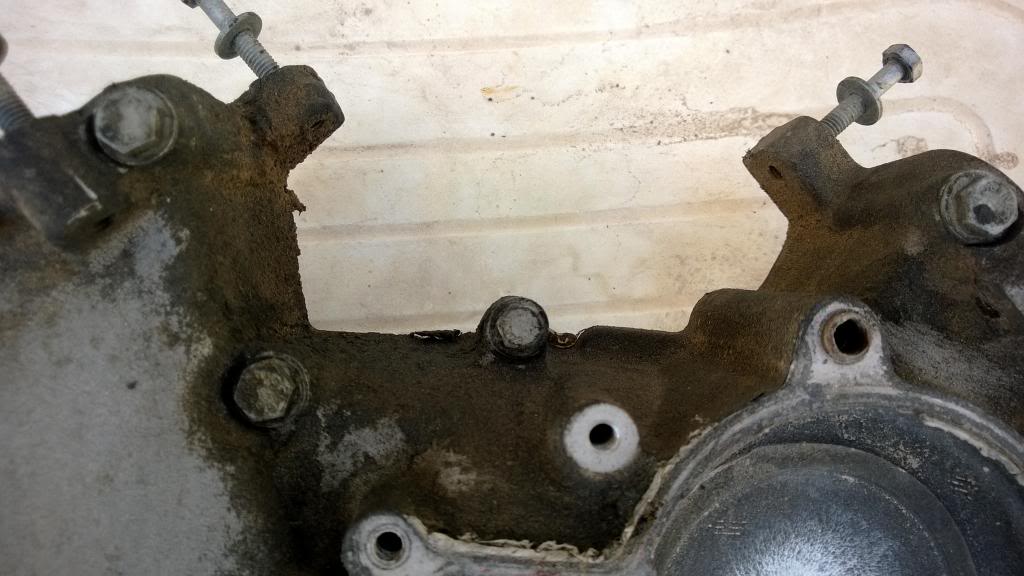 Whenever I change oil in my car I tend to keep around 1L for myself and give the rest to car mechanic shop to recycle. I use it to lubricate my bicycle and other household objects like rusted door/window hinges, iron gates etc. It is a great and free solution to those stuck hinges, but be careful not to use it where there are possibilities of it being in contact with anyone.

Just get rid, in an environmentally friendly way. My local tip takes used oil, they've a big tank you tip it into then a dumpster for the empty bottles, dirty rags etc. There's little practical you can put it towards where the suspended dirt or the carcinogen risk won't make it worth the saving vs a small bottle of cheap clean penetrating oil like 3-in-1.

Bike chains, so far I've found the leftover bottles of heavyweight (75w80 and 80w90) gearbox oil I had lurking in the back of the garage from previous adventures with cars whose gearboxes needed regular topping-up are just about dandy for the job, especially in winter where they're really thick and regular chain lube / chain wax would be candle-stiff. Engine oil is far thinner and would be no good at all - the same as how it's no use in a regular transmission (motorcycle engine-integrated transmission excepted, but even in that case you generally have to use something with specific additives, and it's the chain that takes on the job of Final Drive/differential which is the main thing you need the heavy oil for in a gearbox... so it's quite fitting in that way)

Not the answer you're looking for? Browse other questions tagged oil oil-change or ask your own question.

12
What happens if unsuitable oil is used in a vehicle engine?
42
How far can I drive with 1 gallon too much oil?
5
What do the numbers on motor oil specifications mean?
3
Cleaning Oil Siphon Tube with Brake Cleaner? (Is brake cleaner oil-safe?)
2
How can I empirically evaluate the condition of my used motor oil at home?
2
Checking oil on a newly-aquired used motorbike
1
What are the dangers of too high TBN?
1
Can a engine that calls for 10w30 oil, run with 5w40 oil without any problems?
1
Can I use motorcycle engine oil on automobile?