I've noticed a relatively harmless, but particularly annoying issue has cropped up with my 2004 Mercury Monterey (more-or-less identical to a Ford Freestar of the same model year). Normally, I turn on the turn signal prior to making a turn/lane change/etc. (because I'm a decent driver), and the turn signal turns itself off after I turn the wheel to straighten the vehicle once I've finished turning.

This car has already had a stupid number of problems in its 10 years of existence (including, but not limited to, a recalled torque converter, a water-damaged engine computer, another water-damaged engine computer, a bad anti-theft module, a faulty canopy wiring harness, and other maladies) - we probably could have gotten it replaced under Lemon laws if the problems were actually dealt with when they cropped up. I'm hoping this is something free/cheap/easy to fix that can be done at home.

Can anyone provide insight as to why this might be happening?

It seems your multifunction switch is probably bad. 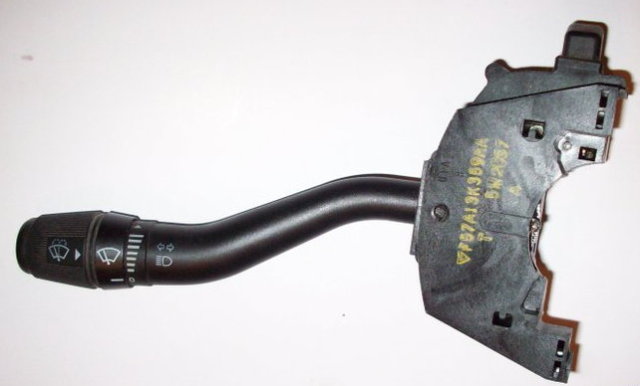 It should be fairly easy to pull this switch to inspect it. I found these instructions to gain access:

The turn signal canceling is part of the function of the 'multifunction switch'. This is a switch mounted on the steering column by 2 screws. Once you take the covers off, you can see the screws, remove them and replace the switch. The new one will cancel just fine. There is no microswitch in this system, the clicking noise you hear used to be a plastic spring loaded finger bypassing the canceling function for the opposite direction when turning the wheel. That's what broke in the switch and now it doesn't extend anymore. You will better understand when you buy the new switch for $75-$100 and try it in your hand. Here is the Ford part number, (5F2Z13K359AAA) but you can probably get it cheaper at an auto parts store rather than the dealer. It will be fine Also, here is the procedure for taking the covers off. First remove the three-four screws holding the covers together from the bottom. Then you should be able to remove the bottom column cover. The lock cylinder is in the way for the top cover, so you need to remove that also. Look under the column for the access hole to release the lock. In the "On" position you can then press the release pin with a 1/8" drill (or similar tool) and simply slide out the lock. Then the upper cover will come off and you can proceed to the switch.

I would personally suggest you remove the switch prior to purchasing a new one to see if there is something stuck in the mechanism (the part of the steering system which actually kicks the switch off). As an aside, looking online for the part, it seems the price of these items has gone up a little bit, more like in the $100-125 range. Should be an easy purchase and an easy replacement.

Not the answer you're looking for? Browse other questions tagged turn-signal steering-wheel mercury or ask your own question.

3
Can I reprogram my car for LED turn signals?
3
Why does my turn signals intermittently flash fast?
3
turn signal blinks wrong direction
5
2002 Jeep Grand Cherokee Laredo turn signals
9
What can cause a steering wheel to end up misaligned, and how to investigate?
3
How to unlock Ford steering column
1
Golf MK4 Turn signals not working
2
The steering wheel turns left or right over small bumps
0
Low-pitch hum in tight low speed turns
1
Turn signals, hazards stopped working