In another question I confirmed what a hood scoop was. I was also wondering what this structure was since it was differently shaped than a hood scoop. I heard it was a "turbocharger" or something like that and that it helped to shove air into the engine and speed the car up. What is it? What's its purpose and do they still make them? Also what cars feature it? I saw it on a Charger and I think other new ones but I am not sure since a lot of turbochargers don't look like this? 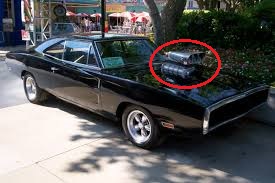 This is a roots style supercharger. Unlike the turbocharger you mention, the supercharger (or "blower") is driven directly by the crankshaft of the engine, via a large belt. Turbos use the exhaust gases to perform the same task. The task at hand is to force more air into the engine than the engine could normally suck in on its own. By doing this, it makes the engine "think" it is bigger than it it actually is and thus produce more horsepower in the process. 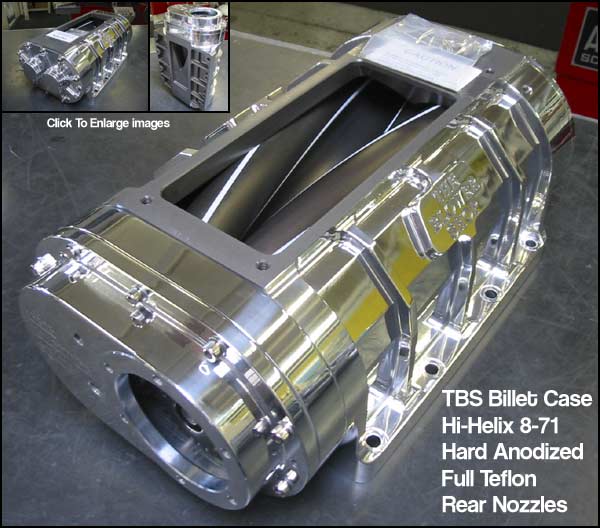 Here is one on an engine: 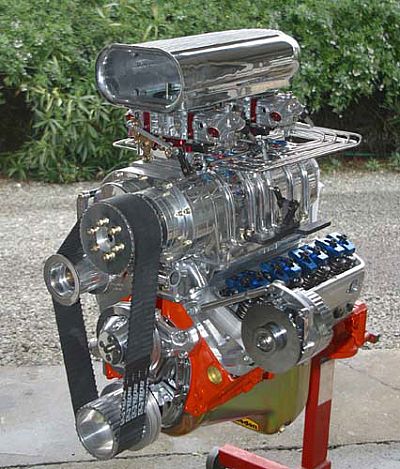 These do not come stock on cars directly from the factory. They are an aftermarket add-on. Some cars come with different versions of superchargers (like the Pontiac Grand Prix GTP), but nothing like the one you show in the picture.

EDIT: This Wiki article appears to have a lot of answers for you.

Just to add, the blower uses a belt to force air into the cylinders to increase the air/fuel mixture. The belt is parasitic, however the blower provides more power than it uses. On Top Fuel Dragsters (and Funny cars) your looking at about a 600hp loss but the power increase more than makes up for the loss. After all a top fuel Dragster goes 300mph in 3-4 seconds. While I've only used one once (yes I'm a Drag racer) it was worth the power gain. I would also like to point out that unless your using a high octane fuel or a alcohol/nitromethane fuel you shouldn't really bother. Normally the blower will raise the cylinder pressure up to around 50psi resulting in other potential problems like hydrofracking (this is where you let off the gas then get back on the accelerator causing a dumping of fuel into the cylinder which becomes solid and can't be compressed causing a rod to throw). Keep in mind I'm trying to be non-technical about a technical topic.

3
Ticking/clicking when accelerating 1997 Dodge Caravan
4
Low-pitched buzzing/droning sound at highway speeds
7
What is this part?
8
What is this please :)?
1
R&R Camshaft Position Sensor - Anything Specific? - 2007 Dodge Charger 2.7L A/T
4
What is this object
0
What is this thing here?
6
What is the purpose of this black plastic loop around rim spokes?
1
Suspension Dodge Charger